Her eyes danced as she told the well-known story of the Curse of the Billy Goat.     –John Grisham, The Litigators (2011)

Although the Chicago Cubs seemed to be mired in fourth place at the end of June 1945, on July 1 they began an 11-game winning streak and moved into first.  Much of the credit belongs to first baseman Phil Cavarretta, who hit a league-leading .355 and won the National League’s Most Valuable Player award.  Perhaps a nod should also go to the St. Louis Cardinals, as star Stan Musial found himself in the Navy that year, which helped the Cubs edge the Cardinals by three games.

Chicago faced the Tigers in the World Series.  Playing the first game in Detroit in near frigid conditions, the Cubs were jubilant after their 9-0 victory.  “Well, we did it!” shouted manager Charlie Grimm in the team’s dressing room.  “It’s a nice cold day to get nine runs, isn’t it?”  Sportswriters predicted an early demise for the Cubs’ opponents, with one journalist declaring, “Only an atomic bomb can save the Tigers.” 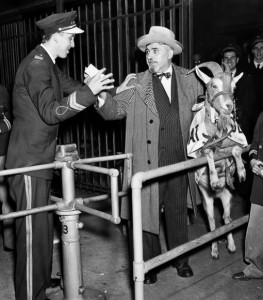 Or perhaps a goat.  The Cubs were leading 2 games to 1 as the Series moved from Detroit to Chicago.  Among the 42,923 fans in Wrigley Field for Game 4 on October 6 was tavern owner William Sianis, nicknamed “Billy Goat” because of his goatee.  Sianis had purchased two box seats for him and his pet goat, and prior to the game he paraded the animal–wearing a sign proclaiming “We Got Detroit’s Goat”–around the field.

Although Sianis and his pet were at first permitted to stay, he was asked to leave before the game ended because of the goat’s objectionable odor.  According to the Chicago Daily Times of October 9, after the Tigers defeated the Cubs, “Sianis sent [team owner] P. K. Wrigley this wire: ‘Who smells now?'”  The Tigers went on to win the World Series, 4 games to 3.  (Photograph shows William “Billy Goat” Sianis and some Andy Frain ballpark ushers recreating the day he and his goat were barred from Game 4.  Click on image to enlarge.)

As Rick Kogan relates in his book, A Chicago Tavern: A Goat, a Curse, and the American Dream (2006), Sianis told reporters what happened to him and his goat at Wrigley Field, and they in turn wrote “playful items about Billy’s outrage” for the Chicago newspapers.  In the articles, however, Kogan points out that there was “no mention of a curse or a hex or a jinx.” 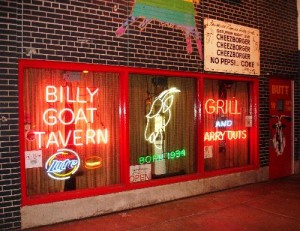 Sianis’s Billy Goat Tavern has always been a haven for journalists, and over the next few years, as the Cubs continued their losing ways, the owner’s newspaper friends jokingly suggested that he must have hexed the team back in 1945.  Sianis played along with the gag, and a brief news item with a photo of the tavern owner and his goat, Murphy, appeared in the Chicago Sun-Times on September 22, 1950.

From this long-ago banter grew the legend that Sianis had placed a curse on the Cubs, swearing that they would never again play in a World Series.  (One of the first references was in the December 26, 1967, issue of the Chicago Tribune.)  With the passing of many losing seasons (and perhaps due to shrewd publicity on the part of Sianis and his widely popular restaurant), the alleged curse has gained international renown, been the subject of several books, and become a part of Chicago and baseball folklore. 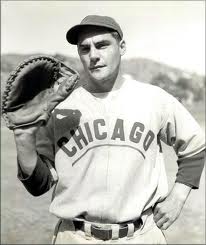 Legends always make for good copy, so it’s likely the story won’t go away anytime soon, even after the Cubs won the World Series in 2016.  On the other hand, some people, such as Phil Cavarretta, pay little attention to the team’s so-called curse and summarily dismiss the very idea.  The 17-year-old Chicago native joined the North Siders in 1934, right after he graduated from Chicago’s Lane Tech High School, and he stayed with the Cubs for twenty years.  One of his teammates said of the scrappy, tough competitor that he was a “no-nonsense guy.  Hard-headed and win at any cost.”

Cavarretta was also known for his candor and blunt honesty.  In 1954 he became the first manager fired during spring training, after he told Cubs owner P. K. Wrigley that the team didn’t have a chance at a winning season (Wrigley said he had a “defeatist” attitude).  Cavarretta was correct, however, as the Cubs finished in seventh place in the National League (out of eight), winning 64 games and losing 90.

Cavarretta, who had played on pennant-winning Cubs teams in 1935 and 1938 as well as in 1945, rejected the very idea of using mythical curses as reasons for losing ball games.  In October 2003, a CNN reporter interviewed him the day after fan Steve Bartman deflected a foul ball during a crucial playoff game, which the Cubs lost.  Here is part of that conversation:

CNN:  “I want to ask you about this curse of the billy goat.  Do you believe in it?”

Cavarretta:  “Actually, once again, the billy goat had nothing to do with it.  I think we had more problems with Hal Newhouser, the [Detroit Tigers] pitcher out there, and Virgil Trucks and Hank Greenberg.  No billy goat, whatsoever.  And especially Newhouser, who we all know, may his soul rest in peace, [was a] Hall of Famer.  He’s the one that beat us, not the billy goat.”

Baseball historians as well as players have come to the same conclusion.  I own hundreds of Cubs histories, and one of my favorites is Glenn Stout’s and Richard A. Johnson’s The Cubs: The Complete Story of Chicago Cubs Baseball (2007).  In a two-page essay, “The Real Dope on the Real Goat,” Stout writes the following:

Sianis’s curse is as spurious as Boston’s “Curse of the Bambino,” the utterly fictional claim that Babe Ruth cursed the Red Sox after being sold to the Yankees.  The notion of a “billy goat”-inspired hex or curse was a later product of the press, and Sianis was savvy enough to play along with it.  In fact, before the 1990s, when Boston’s curse was invented from whole cloth and gave the whole hoary notion a platform, the billy goat curse barely existed apart from a few brief newspaper stories that began appearing in the late 1960s–more than twenty years after the 1945 World Series.”

Another excellent book is Sam Pathy’s Wrigley Field Year by Year: A Century at the Friendly Confines (2014).  After discussing the origin of the legend, Pathy writes:  “The goat, entering and being thrown out of Game Four of the 1945 World Series, is factual.  The subsequent story of Billy Sianis’s curse, hatched over twenty years after the fact, is a great yarn, made greater by the Cubs’ mediocre play.  But logic says it never happened.”

1 Response to A So-Called Curse