Before Chuck Connors became known to millions around the country as Lucas McCain in the hit television program The Rifleman, he was a professional athlete.  He played basketball with the Boston Celtics during the 1946-47 season, took the field for one game with the 1949 Brooklyn Dodgers, and was first baseman for the 1951 Chicago Cubs.  (He played in sixty-six Cubs games and hit .239 with two home runs,) 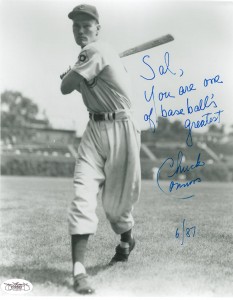 Although Connors did little on the baseball diamond to cause his teammates to break into applause, the brash 30-year-old delighted them with his numerous antics off the field.  He often performed card tricks to an admiring crowd, and he needed no encouragement to break into a rendition of “Casey at the Bat.”

Right:  In June 1987 Connors inscribed this photograph of himself as a Cub to Sal “The Barber” Maglie (who was renowned for giving batters “close shaves” with his inside pitches).  He wrote, “Sal, you are one of baseball’s greatest.  Chuck Connors.”  (Click on photo to enlarge.)

After the season ended, Connors was sent to the Cubs’ Los Angeles Angels farm club in the Pacific Coast League.  “Greatest break I ever got,” he said in 1954. “I’m out there right in the middle of the movie business where, if a guy has anything, he’s got the chance to break in.”

And break in he did.  In 1952 an MGM casting director offered Connors a bit part in the Spencer Tracy / Katharine Hepburn film, Pat and Mike.  He was paid $500 for just a few hours of work.  “I said right then, this is my racket,” Connors remembered in a 1966 interview.  “Playing with Tracy and Hepburn, I was in the big leagues much faster than when I arrived there in baseball.” 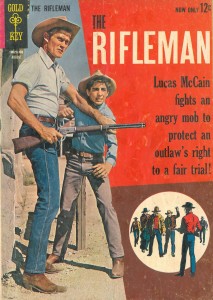 Connors certainly entered the big leagues in 1958.  That year the rugged 6′ 5″ actor walked onto a movie set to try out for The Rifleman.  According to a Time magazine article, “The director suddenly pitched a rifle at him.  Chuck fielded it neatly and got the job.”  Connors played the part of rancher Lucas McCain during the entire run of the television program, from 1958 to 1963.  “I can never get rid of The Rifleman,” Connors said years after the series ended, “and I don’t want to.  It’s a good image.  Basically, [the program] was the simplicity of the love between the father and the son. . . .  The rifle was for show, but the relationship was for real.”  (Left: A Rifleman comic book.  Click on it to enlarge.)

Johnny Crawford, who played McCain’s son, Mark, said that the close relationship extended off camera as well.  In one interview he commented that he and Connors hit it off as soon as they met, and “Chuck would even include me on camping trips with his sons.”  Crawford added that he was familiar with his friend’s athletic background.  “I wanted to play baseball in between scenes,” he remembered, “but Chuck always insisted on being first up at bat, and [after he swung] we couldn’t find the ball!”

In a 1966 interview, Connors said that movies and television had been good to him over the years, and they provided him with a comfortable life and a gorgeous home in the San Fernando Valley.  But he also admitted that as much as he loved acting, “Maybe baseball is a purer, healthier way for a guy to make a living.” 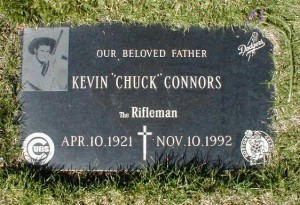 An article in the October 2000 issue of the Chicago Cubs’ Vine Line mentions that “Connors batted a modest .238 in 67 games.  As an actor, he was in 7 television series and 71 feature films before his death in 1992.” He is buried in the San Fernando Mission Cemetery in Mission Hills, Los Angeles County, California.  Note the Cubs logo on the lower left of his gravestone.

7 Responses to “The Rifleman” (As a Cub)