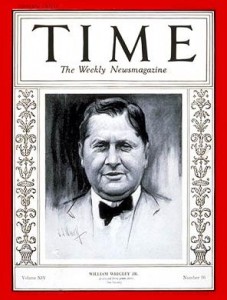 “Nothing great was ever achieved without enthusiasm,” proclaimed the maxim in the small black frame that looked down on everyone who entered the office of William Wrigley Jr.  The Chicago Cubs owner and corporate executive whose name is virtually synonymous with chewing gum took his own advice to heart, and in the history of the team, few administrators matched him for energy and business acumen.  He also understood people, which  contributed to his success.  Wrigley was “red-cheeked, dewlapped and genial,” according to Time magazine in a 1929 cover story, and “given to exercise, to backslapping, to the indulgence of strange whims that usually turn out to be investments.”

Wrigley’s investment in the Cubs started with lunch counter magnate Charles Weeghman, a longtime fixture in the city’s business community.  “Weeghman is rated a splendid sportsman in Chicago,” gushed the December 30, 1915, Sporting News in a page 1 photo caption.  “He is a man who has made himself, having started as a waiter in a restaurant, and now he owns a dozen or so of his own.” 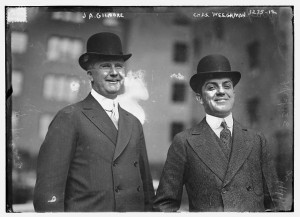 Offering higher salaries than the other two leagues, the Federal League quickly moved to hire many baseball stars.  It succeeded, too. For instance, the Chi-Feds signed the Cubs’ Joe Tinker as both shortstop and manager, and the St. Louis Terriers lured the  famous pitcher Mordecai “Three Finger” Brown away from the Cubs.  (Note: Chi-Feds was short for Chicago Federals.  In 1915 the team changed its name to the Whales.)

In 1914 Weeghman built Weeghman Park on the corner of Clark and Addison streets for the Chi-Feds.   That year his team lost to the Indianapolis Hoosiers in a close race, but it managed to win the pennant the following year in an even tighter contest.   As the Chicago Daily Tribune excitedly exclaimed on October 4, 1915:

Spurred by the deafening cheers of one of the greatest baseball crowds this city ever has seen, Joe Tinker and his fighting Whales brought the Federal league pennant to Chicago by beating Pittsburgh yesterday in the second game of the double header on which the flag depended.  One nerve racking rally in the sixth brought a 3 to 0 victory. . . .  Surpassing even the wonderful climax was the crowd that turned out to see the finish of the race.  It filled Weeghman park till it looked ridiculously small, and when the official attendance was given out as 34,212 there were few who questioned the count.

Right: After the George Wittbold Company in Chicago completed the landscaping for Weeghman Park, the firm took out this testimonial advertisement in the Chicago Record Herald.  Note the workmen grading the park in the photograph.  (Click on image to enlarge.)

Unable to compete against the well-established and powerful American and National Leagues, the independent Federal League folded after the 1915 season.  Charles Weeghman, however, was not yet out of baseball.  He and his millions led a group of investors who on January 20, 1916, purchased the Cubs for $500,000 from Cincinnati publisher Charles P. Taft, the half brother of President William Howard Taft.

At that time, this was the highest price ever paid for a major league team.  But the money didn’t faze Weeghman.  “I was young—and cocky—and decided that I could afford to sink a half million or so in the Cubs,” he reminisced in 1936 to a Chicago Daily Tribune reporter.  “My string of restaurants were paying big and, to the best of my figuring, I was worth between eight and ten million dollars.” The Cubs immediately vacated their West Side Grounds (also called the West Side Park) and moved across town to Weeghman Park. 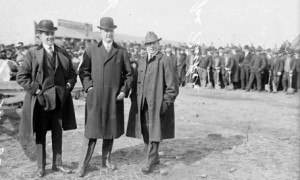 Left: From left to right are Charles Weeghman, Federal League President James A. Gilmore, and Chi-Feds player Joe Tinker at the groundbreaking ceremony for Weeghman Park, March 4, 1914.  Note the men with shovels in the background.  When the ill-fated Federal League dissolved after the 1915 season, Weeghman bought the Cubs.  (Click on image to enlarge.) 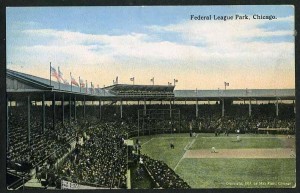 Right:  In early February 1914, workmen tore down a few old seminary buildings at the corner of Clark and Addison streets in Chicago.  By mid-April, Weeghman Park (now known as Wrigley Field) was completed on the site at a cost of $250,000.  The one-level concrete and steel structure could seat 14,000 fans.  (Click on image to enlarge.) 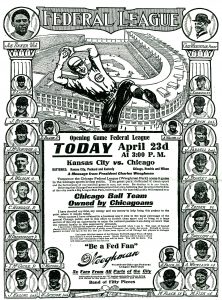 Left: Charles Weeghman’s new ballpark opened on April 23, 1914.  To publicize the event, he took out quarter-page ads in all of Chicago’s daily newspapers.  “Tomorrow the Chicago Federal League (Weeghman Park) opens it[s] gates to the Chicago sports-loving public,” he wrote.  “This great park, dedicated to clean sport and the furtherance of our national game is yours, not ours.  Its destiny is in your hands.”  He added that “I have been a baseball fan myself for years; I know good baseball when I see it.  This team of baseball players which we have assembled is one of which every Chicagoan can justly feel proud.”  (Click on image to enlarge.) 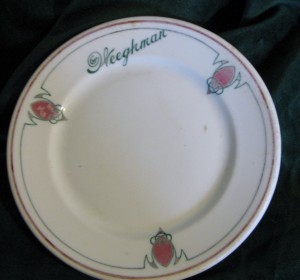 Right: Charles Weeghman became rich in the lunchroom business.  Note the distinctive logo on one of his plates (click on the image to enlarge).  The restaurateur’s last name is in a flowery script with “CHAS.” (the abbreviation of Charles) in the whirl of the “W.” (Interestingly enough, the “HAS.” sits snugly inside the “C” in the same way that “UBS” fits inside the “C” in the Cubs logo, which was first used on the team’s 1909 road uniform.)  The same Weeghman logo is on the handle of a silver spoon that I recently found. 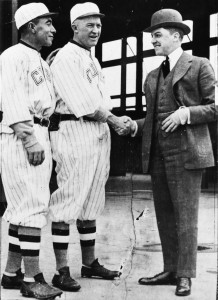 Left:  I recently obtained the negative of this 1918 photograph, which shows, from left to right, Chicago Cubs Manager Fred Mitchell, pitcher Grover Cleveland “Pete” Alexander, and Cubs owner Charlie Weeghman.  Mitchell managed the Cubs for four years (1917-1920), and took them to the World Series in 1918.  Unfortunately, the team lost to the Boston Red Sox in that war-shortened season, four games to two.  After Mitchell was let go, he joined the Boston Braves as manager.  Pete Alexander pitched well for the Cubs for several seasons, but his alcoholism and erratic behavior caused him to be traded to the St. Louis Cardinals in 1926. (Click on image to enlarge.)

Weeghman had a variety of interests that he was constantly juggling, and as he admitted later, “I wanted to spread out all over the country.”  He should have stuck to his restaurants instead of diverting so much of his attention (and money) to a myriad of other pastimes. 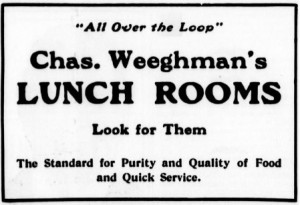 Besides baseball and restaurants, there were movie houses and film companies.  He also loved high living and carousing in night clubs with politicians, show people, and gamblers.  Alas, after years of neglect, his finances were (as the New York Times understated in his obituary) “disordered,” and he needed to borrow money.  (Right: A Weeghman ad from the Chicago Eagle, 1915.)

He didn’t have to look very far for ready cash.  Less than a week before Weeghman signed the papers with Charles Taft, Weeghman announced the names of the city leaders who had purchased an interest in the club during a private dinner attended by some 200 prominent Chicagoans.  “I told my friends and associates to name the four biggest business men in Chicago,” Weeghman told his guests, “and then said that I would go out and see them personally regarding taking stock in the purchase of the Cubs.”  One of those four men was William Wrigley Jr. 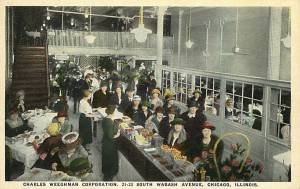 According to a December 1920 article in the Chicago Daily Tribune, two of Weeghman’s “one arm eateries are going to be made over into modern cafeterias as fast as Architect John Archibald Armstrong’s plans can be carried out.” Left: This postcard shows one of Weeghman’s lunch rooms. Click on image to enlarge.)

In the coming months, Wrigley continued to assist his friend by buying shares in the Cubs.  In December 1916 he bought a $15,000 block of stock, which caused “considerable comment in sporting and financial circles,” according to the Chicago Daily Tribune.  Wrigley, however, was unconcerned.  At that time he owned $165,000 worth of Cubs stock and remarked that “I wish  I had more.  I think the Chicago Cubs ought to be owned by Chicago men and I’m glad to be interested. . . . The Cubs form a Chicago institution and there is a sort of civic pride in being interested.”

But William Wrigley was more than just interested.  Adhering to his motto, he was enthusiastic, and the more he invested the more passionate he became.  The Chicago Daily Tribune began referring to him as “one of the big stockholders of the Cubs,” and he  became increasingly involved in the team’s administrative affairs.

(Continued in the next section of WrigleyIvy.com, Wrigley Jr. & Veeck Sr.).