Probably no occurrence on the baseball field has been discussed–or disputed–more than what transpired during the third game of the 1932 World Series.  The date was October 1, and the New York Yankees were playing the Cubs at Chicago’s Wrigley Field.  Babe Ruth had hit a 3-run homer in the first inning, and the Cubs “bench jockeys” were heckling him and calling him names when he came to the plate in the fifth inning to face pitcher Charlie Root.

Why the hostility towards Ruth?  Well, the New Yorkers knew Chicago was helped significantly in its pennant race by former Yankee Mark Koenig, who joined the Cubs in early August and batted .353 in 33 games.  His teammates, however, voted him only a half share of the club’s World Series monies, rather than a full share.  When this fact was reported in the newspapers, the Yankees (and Ruth in particular) responded by deriding the Cubs as “cheap” and “penny-pinching.”

I was playing third base. I was right close to it. [Ruth’s] got two strikes on him. The guys are yelling at him from our dugout. He’s looking right in our dugout, and he holds up two fingers. He said, “That’s only two strikes.” But the press box was way back on top of Wrigley Field, and to the people in the press, it looked like he pointed to center field. But he was looking right into our dugout and holding two fingers up. That is the true story. I’ve been asked that question five hundred times. 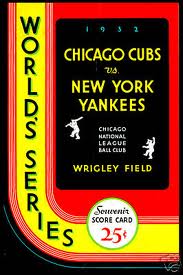 English added that pitcher Charlie Root “threw hard, had a good curve ball,” and when he was on the baseball field “was a competitor all the way.”  Root himself said that if Ruth had tried to show him up by gesturing to the outfield, “I’d have put one in his ear and knocked him on his ass.”

Others saw it differently, of course, but what happened next is unarguable:  Ruth smashed Root’s next pitch into the bleachers.  Lou Gehrig followed with a home run of his own, leaving the Chicago team thoroughly demoralized.  “The Yankees had just too much power for us,” English sighed.  “It was discouraging.”

It was even more discouraging for the Cubs when they lost the game–and later the World Series.  In the dozens of press reports scrawled that day by on-site reporters, only one–written by Joe Williams of the New York World-Telegram–noted that Ruth pointed to center field to indicate the location of his home run ball. Many newspapers mentioned gestures to the dugout rather than the outfield. A few journalists wrote that the Babe signaled his home run (that is, he “called his shot”), but they made no references in their stories to him pointing to the outfield. For example:

New York World-Telegram:  “In the fifth, with the Cubs riding him unmercifully from the bench, Ruth pointed to centre [sic] field and punched a screaming liner to a spot where no ball ever had been hit before.” [Note:  In virtually all commentaries on Babe Ruth’s home run, this sentence is quoted inaccurately.]

Chicago Daily Tribune:  “Many a hitter may make two home runs, or possibly three in world series play in years to come, but not the way Babe Ruth hit these two.  Nor will you ever see an artist call his shot before hitting one of the longest drives ever made on the grounds. . . .”

Chicago Herald and Examiner: “This time he called his shot, theatrically, and with derisive gestures towards the Cubs’ dugout.” 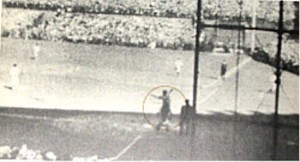 Some fifty years later, two film versions of the historic home run surfaced, both shot by fans sitting in the bleachers with 16-mm. cameras.  Although it’s clear that Ruth did something with his right hand (see photo), the film angles allow for only debatable speculations, not decisive rulings.

No matter.  The famous “Called Shot” will give baseball enthusiasts plenty to argue about for another fifty years.  Chicago Cubs historian and writer Art Ahrens once remarked that his father was sitting on the third-base side of Wrigley Field’s grandstand when Ruth hit his home run.  The older man always said that from his angle, it looked like Ruth pointed to center field.  On the other hand, Art Ahrens knew a Catholic priest who was also at the game, but seated along the first-base side.  This person always said that Ruth was gesturing to the Cubs’ dugout.  “So,” the young Ahrens asked, “who should the author believe–his father or his priest?”

Baseball historians tend to favor the side of the Cubs.  They point out that only one article published right after the game mentions Ruth indicating where he was going to hit the next pitch.  Robert Creamer, one of Babe Ruth’s foremost biographers (Babe: The Legend Comes to Life, 1974), believes that reporter Joe Williams’s “strong personality and the wide circulation given his original story . . . are what got the legend started and kept it going.” Creamer adds that “Ruth told John Carmichael, a highly respected Chicago sportswriter, ‘I didn’t exactly point to any spot.  All I wanted to do was give that thing a ride out of the park, anywhere.'”

Babe Ruth expanded on the subject in 1938 during a conversation with Ed Froelich, a trainer for the Brooklyn Dodgers.  Ruth said:  “I may be dumb, but I’m not that dumb.  I’m going to point to the center-field bleachers with a barracuda like Root out there?  On the next pitch they’d be picking it out of my ear with a pair of tweezers.”

New York Yankees Manager Joe McCarthy (who particularly savored the World Series victory, after having been fired from the Cubs just two years earlier) said that the whole episode was merely “a good story” and that “Babe went along with it.  He was a great showman, you know.  But later on he admitted that he never pointed to the bleachers.”

But does it even matter?  Robert Creamer stresses that “the fact that Ruth did not point to center field before his home run does not diminish in the least what he did. . . .  The legend grew, obviously, because people gild lilies and because sometimes we remember vividly seeing things we did not see.” 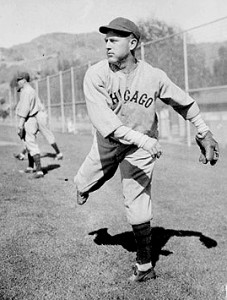 Fiery Cubs pitcher Charlie Root (right) always denied that the Yankees slugger gestured to center field.  When Root was offered a substantial fee to play himself in the movie The Babe Ruth Story (1948), he refused, saying, “Not if you’re going to show him pointing.”

Donald Honig writes in his book Baseball America (1985) that one day Charlie Root wandered onto the movie set, and he and Babe Ruth started talking.  Suddenly Root rather sternly said, “Hey, you never pointed out to center field before you hit that ball off of me, did you?”  Ruth started laughing and said, “I know I didn’t, but it made a hell of a story, didn’t it?”

According to Roger Snell, author of Root for the Cubs, Root’s feelings on the matter never wavered. One afternoon, for example, as he and his family played Wiffle ball during a family outing, Charlie Junior’s wife made the mistake of defiantly pointing her bat out to center field.  Root immediately sent the plastic ball whizzing toward his daughter-in-law, hitting her neck.

Charlie Root played with the Cubs from 1926 to 1941 and remains the greatest pitcher in club history, holding the franchise record for career wins (201) and seasons (16).

(In September 2013 I expanded this piece for ChicagoSide magazine in “Making a Point:  Did Babe Ruth Call His Shot?”  Ed Sherman commented on this article in his “Sherman Report.”)