“Show me a hero and I’ll write you a tragedy.”–F. Scott Fitzgerald

[STILL WORKING ON THIS].  He was short in stature and unfortunately, so was his career.  Lewis Robert “Hack” Wilson remains one of the most famous–and tragic–players in Chicago Cubs (nay, baseball) history.  In 1930, he batted in 191 runs (RBIs), a baseball record that will probably never be broken.  His 56 home runs that pre-steroids year remained a National League record until Mark McGwire and Sammy Sosa eclipsed it in 1998. 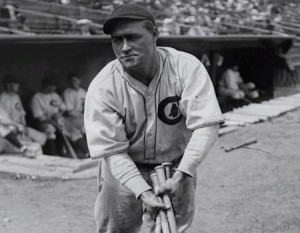 Wilson’s exploits off the field often garnered as much newspaper coverage as his baseball prowess.  As one sportswriter put it:  “He was built like a beer keg, and not entirely unfamiliar with its contents.”   Manager Joe McCarthy did his best to handle the freewheeling Wilson, who usually spent every evening with his cronies in local taverns (though as he occasionally said, “I never played drunk.  Hung over, yes, but never drunk”). [URL for photo is <http://phillysportshistory.com/tag/hack-wilson/>.

In a perhaps apocryphal story, one day McCarthy wanted to teach Wilson the evils of alcohol.  He placed two glasses on a table, one containing water and the other whiskey, and dropped a worm in each.  The worm in the water swam around the glass, while the worm in the whiskey died.

McCarthy asked Wilson:  “So, Hack, what does this teach you?”

Wilson’s reply:  “If you drink whiskey, you won’t get worms.”

Wilson died penniless in 1948, when he was just 48 years old.  In 1979 he was elected to the National Baseball Hall of Fame.