The success of the White Stockings in 1876 was due not only to their stellar offense, but also pitcher Al Spalding, who led the fledgling National League with his 47 wins. When he was not on the field hurling baseballs, he and his brother, Walter, operated a sporting goods store at 118 Randolph Street in Chicago, which they had opened earlier in the year 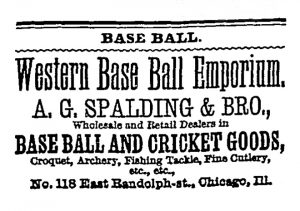 As the sporting publication the New York Clipper announced, the two businessmen promised that “special attention is paid by this house to the getting-up of club uniforms, and that they are prepared to supply all the necessary outfit[s] for baseball and sporting associations.” (Advertisement is from the Chicago Daily Tribune.  Click on image to enlarge)

It was fortunate that Al Spalding had his business to fall back on, as he decided to curtail his pitching career. He would still pitch some games in the next season, but he would play most games at first base instead. He would also continue his role as team manager, club secretary, and colleague of White Stockings President William A. Hulbert. 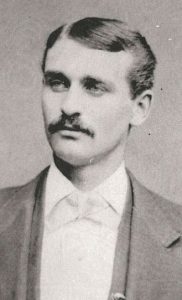 Any feelings of optimism Hulbert and Spalding might have had would soon dashed, as the White Stockings did not live up to pre-season expectations. The team won its regular season opener but then lost four in a row. Furthermore, star hitter Ross Barnes was out for much of the season with a debilitating illness similar to malaria. As for the other White Stockings, they also seemed unable to play baseball as well as they had during the previous season. In early June the Chicago Daily Tribune attributed an embarrassing 9–2 defeat to “loose fielding and scandalously weak batting,” though the latter, it dryly added, had been so noticeable during the season that “it excited no special comment.” (Photograph of Ross Barnes taken in 1872.

The same could have been said about the White Stockings as a whole. They limped through September and October winning just six games out of 17 (6–10–1).  Infielder Adrian Anson dubbed 1877 “a year of disaster as far as Chicago was concerned,” for the team finished the season buried fifth among the National League’s six clubs, 15½ games behind first-place Boston. The New York Clipper faulted Captain Al Spalding, pointing out that as captain, assistant to William Hulbert, and store owner, he had “too many irons in the fire.”

Spalding knew that his and his brother’s thriving sporting goods store was occupying an increasing amount of their attention. The ball player also realized that his athletic skills were fading, and he retired from active play at the end of the season. He would, though, still retain administrative club duties under President William Hulbert.

In 1878 the White Stockings took the field in a new ballpark, built on the same location as the facility that had burned down in 1871, thanks to the Chicago Fire. Their gleaming new park, however, was about the only bright spot for the Chicago players during the 1878 baseball season, as their finished fourth place in the National League, 11 games behind Boston. 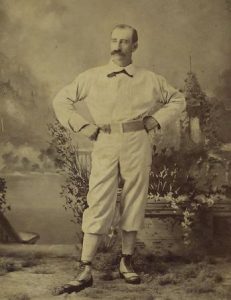 What led to the apparent collapse of the White Stockings?  The Chicago Daily Tribune sarcastically noted at the end of September that they were “outbatted and outfielded,” but sagging team morale might also have played a role. Hulbert had needed a new player-manager to replace Al Spalding, so he hired Bob Ferguson of the Hartfords of Brooklyn. Ferguson was indeed a good, solid player, but his hot temper was well known around the baseball world. On top of his poor managerial skills, Ferguson occasionally butted heads with William Hulbert, who failed to renew his contract at the end of the season.  (Left is Bob Ferguson, circa 1878). 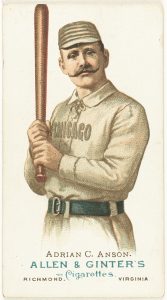 Taking over managerial duties in 1879 was Adrian Anson, whose role as team captain would be acknowledged by the nickname “Cap.” As the new manager, he had some changes in mind to improve his club’s record.  He had played third base in 1876 and 1877, and patrolled the outfield in 1878 while Ferguson was manager.

When his White Stockings played a solid amateur team on a chilly April afternoon, the new captain positioned himself at first base.  Not only did his club win the game, 35-5, but he also helped turn a triple play in the fourth inning, hurling the ball “like a shot” from first to home plate, according to a local sportswriter.  (Click on image to enlarge.)

Of course, Anson had some help, too. The Milwaukee and Indianapolis clubs had disbanded following the 1878 season due to financial difficulties, and the Chicago team immediately saw the opportunity to add some new faces to its lineup. 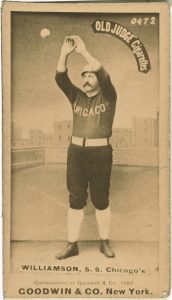 These players included outfielders Abner Dalrymple and George “Orator” Shafer, infielders Joe Quest and Edward “Ned” Williamson, and catcher Frank Sylvester “Silver” Flint. George Gore, formerly of the New Bedford Club in Massachusetts, also joined the White Stockings.   The Chicago Times reported in its game-day coverage that the men all “worked well and smoothly together, showing an unexpected degree of fielding skill at this season.”

The National League’s eight teams (Boston, Buffalo, Chicago, Cincinnati, Cleveland, Providence, Syracuse, and Troy) officially opened the 1879 season on May 1. In their first two series, the White Stockings swept the league’s newly added Syracuse Stars and Troy Trojans from New York and then took two out of three from Rhode Island’s Providence Grays.

The Chicagoans continued to demonstrate the “fielding skill” that the Times had referred to, and by August 1, the White Stockings’ league-leading record of 34–12–2 put them 5½ games in front of second-place Providence.

Chicago did not stay in first place for long. It was bad enough that catcher Silver Flint injured his hand during an exhibition game in Dubuque, Iowa, but in the summer Cap Anson struggled with, as one paper put it, a “billious [sic] fever.” His condition grew worse, with reporters describing his ailment as a liver affliction.

Anson tried to ignore his illness and continue to play, but all too frequently he had to scratch his name out of the lineup. Center fielder Jack Remsen moved over to first base, but his skills clearly did not equal those of the team’s leader. A loss on August 19, the third in a row, dropped Chicago to 1½ games behind the Grays, and the Tribune bemoaned that “it looks now as if the White Stockings had bidden good-by to the championship, which, but a few weeks ago they were supposed to have practically in their hands.” 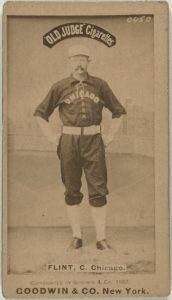 Meanwhile, Anson bid farewell to his teammates as he went home to Marshalltown, Iowa, to recuperate. The White Stockings with Silver Flint as captain battled on without him, but they again ended the season in fourth place, 10½ games behind the Providence Grays.

Chicago, however, was one of the few clubs to turn a profit in 1879, just as it had in 1878. The team also led the National League in attendance both years.  Cap Anson fared well, too. After recuperating at his family home in Iowa, he returned to Chicago at the end of September “looking as hearty as ever,” according to the Chicago Daily Tribune. He and other team members soon left for California to play a series of exhibition games. While they were gone, the Tribune predicted that Anson would resume his place “on the field next May with all his abilities unimpaired.”

White Stocking fans were counting on Anson’s good health. So, too, were the club’s directors, who were determined to do their part to assure his—and the team’s—success. “So far as the home management is concerned,” the Chicago Times reported in October, “earnest endeavor will be made to snatch victory from defeat, and that no pains will be spared to have Chicago fitly represented in the championship arena during the season of 1880.”