Origin of the Cubs

Today’s Chicago Cubs began as the White Stockings, a team name that lasted until 1889.  Based on the relative youth of the players, the team was next called the “Colts” (1890-1897).  When the club’s owner refused to renew manager Cap Anson’s contract in 1898, the leader-less ballplayers were dubbed the “Orphans” (1898-1901).  After a disastrous 1901 losing season (53-86), the manager Frank Selee began a huge rebuilding project, stocking the team with young players and rookies.  Hence the “Cubs.” Other names cropped up over the years as well.  During the early 1900s the Chicago National League team was also called the Remnants, Nationals, Sprouts, Seedlings, Recruits, Hartites, Microbes, Seleeites, Selee’s Colts, and the Tribe of Selee.

Where did they all come from?  Many clubs during this period were simply referred to by their cities, such as the Chicagos or Bostons.  The team names themselves were often coined not by their respective clubs but by newspapers’ ingenious sportswriters.  Reporters would occasionally even use two different names in the same newspaper article, if only as a literary device to avoid repetition. The names would catch the public’s fancy, and eventually, through popular use, become a part of the club’s history.

That’s why the dates given in the first paragraph may vary, depending on the research work one consults, and at best are only approximations (the Baseball Almanac is among the sources that uses the above dates for the various Chicago teams).  Often more than one name would be used at the same time, depending upon the newspaper and the whims of readers. 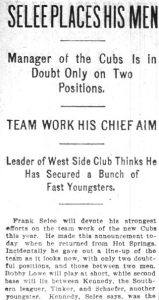 As for “Cubs,” Chicago Daily News sports reporter Fred A. Hayner felt that “Orphans” was too long to put in headlines; moreover, he preferred a name that would reflect Selee’s rebuilding plan and his emphasis on youth. In the opening sentence of an article in the March 27, 1902, Daily News, Hayner observed that “Frank Selee will devote his strongest efforts on the team work of the new Cubs this year.”

Former Daily News city editor James Gilruth recalled years later that the name change was a result of a discussion with him, Hayner, assistant sports editor Charles Sensabaugh, and reporter George C. Rice. Gilruth said that Hayner had objected to Orphans, so “one of us, I don’t recall who, came up with the name Cubs, and Cubs it was and Cubs it is even today.”

The name did indeed stand out (click on above image to enlarge), although “Colts” and other names were still used by some newspapers and sportswriters.  According to Cubs historian Art Ahrens in his book Chicago Cubs: Tinker to Evers to Chance (2007), by 1907 the name Cubs regularly appeared on the club’s scorecards and the team was “universally called the Cubs by all the newspapers.”  John Snyder observes in his Cubs Journal (2008) that Chicago manager Frank Chance “insisted in 1907 that the club be called the ‘Cubs’ exclusively.  The Chicago newspapers fell in line.  The Cubs nickname was ‘officially’ recognized during the 1907 World Series, when new coats were issued to the players sporting a large white bear figure on each sleeve.”  (I cover more about the team name in my book Before They Were the Cubs:  The Early Years of Chicago’s First Professional Baseball Team.)

Left: Besides new coats, the 1907 Cubs received World Series medals.  From the Chicago Daily Tribune:  “Its center represents in rose gold the ‘world,’ on which is mounted in relief the profile of a bear cub holding a large diamond in his teeth, which are to be of aluminum.  A ruby represents the cub’s eye.  The figures ‘1907’ will be raised slightly.  Circling this field is a band of Roman gold bearing the inscription ‘World’s Champions.'”

The Tribune also notes that “on the reverse side is a place for engraving each player’s name.  The medals are of 14 karat gold.”

8 Responses to Origin of the Cubs