According to a well-respected history of Chicago, by the mid-nineteenth century, “Baseball rivaled [horse] racing in the popular fancy.”  During the Civil War years, there were only a few amateur teams in Chicago, but by 1866 more than thirty had sprung up throughout the city.  There were, however, no professional (that is, salaried) teams, but that would soon change.  As the Chicago Tribune reported, in early October 1869 “citizens interested in the project of engaging in Chicago . . . a professional base ball nine” held organizational meetings and started raising the necessary funds.  Interest was high, the Tribune went on, and there was a “favorable feeling among business men and citizens generally, concerning the matter.” 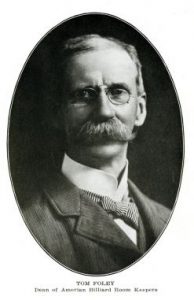 Committee members advertised in sporting publications throughout the country and sent representatives to various cities to recruit players.  By February 1870, the baseball club was “beginning to take tangible shape,” according to the Chicago Tribune, as “five of the players engaged for the season have arrived.”

Right:  Well-known billiards player Tom Foley served as the team’s business manager.  The club’s early success was largely due to his steady leadership and shrewd recruiting activities throughout the East.  (In Bury My Heart at Wrigley Field, Larry Names refers to Foley as a “renowned sport, billiards player par excellence, gambler, saloon owner, and sound businessman.”)

By March 1870 the core team members had been selected and signed to contracts, and most of the men were in Chicago and on the ball field.  The Chicago Tribune noted that a “fine practice game” and “the first base ball playing of the season” took place on April 9 between the Chicago team and an amateur city club.  “Numerous other afternoons have been devoted to practice,” the newspaper continued, “but this was the only occasion when the play might be said to reach the dignity of a game of base ball. . . . An immense crowd of people was in attendance, and the utmost interest was taken in the game.” 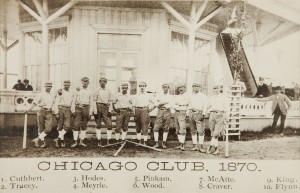 Interest in the new baseball club continued, and the team members debuted in their first professional game on April 29, 1870, soundly thrashing the Louisville Unions by the score of 47-1.  As described by the Chicago Tribune, each ballplayer wore a new uniform, which “consists of a blue cap adorned with a white star in the centre, white flannel shirt, trimmed with blue and bearing the letter C upon the breast worked in blue.  Pants of bright blue flannel, . . . stockings of pure white British thread, shoes of white goatskin, with the customary spikes, the ensemble constituting by far the showiest and handsomest uniform ever started by a base ball club.” (Click on image to enlarge.)

Although many teams at this time were simply referred to by the names of their cities (Chicagos, Bostons, Worcesters), because of the “showy purity of the hose,” both journalists and fans started calling the Chicago ballplayers the “White Stockings.” (Genealogically speaking, there is no connection to the present-day White Sox, who took the name after the Cubs dropped it.) 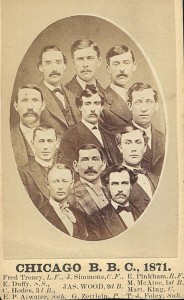 The White Stockings played well their inaugural year, and they continued their winning ways during the following season.  By the end of September 1871 they were tied for first place with the Philadelphia Athletics and were looking forward to, as the Chicago Tribune wrote, “the fifth and deciding game with the Athletics” on October 17.

Right: A rare 1871 Chicago Base Ball Club team card, issued by the Chicago sporting goods store J. A. Pierce and Company.  In the center is the popular James “Jimmy” Wood, the White Stockings’ second baseman and team captain.  He was the first White Stocking signed in 1869, so one might say he was the first Chicago Cub.  (Click on image to enlarge.)

Unfortunately, there was a little matter of a fire. And not just any fire.  After flames broke out on Sunday evening, October 8, in Patrick and Catherine O’Leary’s barn on Chicago’s southwest side, it did not take long for it to incinerate more than three square miles in the heart of the city. Included among the property destroyed were not only the White Stockings’ stadium and grounds but also the homes and possessions of most of the players.

Baseball and the plight of the team, however, were far from the minds of most Chicagoans.  “Up to Sunday night the dozen men who formed the White Stocking nine undoubtedly occupied a larger share of the public attention than any other body of private citizens in the city,” a Chicago newspaper declared.  “By way of contrast, it may be said that they occupied very much inferior positions in the attention of the people on Monday and Tuesday.” 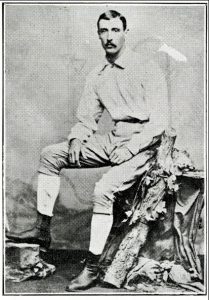 But they were uppermost in the mind of Captain Jimmy Wood.  He quickly contacted the New York Clipper entertainment newspaper, asking that it publicize the Chicagos’ predicament so that players could sign new contracts for 1872. He added in his letter that the White Stockings “are released from their engagements” and “we are one and all now in the market.”

(Right:  This rare photo of Jimmy Wood was taken in 1871 and shows him in his White Stocking uniform. As David Nemec writes in his Major League Baseball Profiles, 1871-1900 (vol. 1, 2011), “Jimmy Wood was one of the most important figures in baseball’s fitful transition from amateurism to professionalism.”) 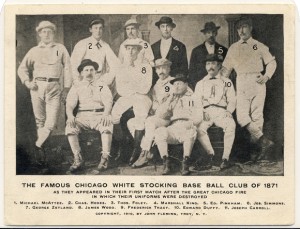 The baseball world was one step ahead of Wood, however.  By the time the article appeared, the newspaper had already suggested that baseball clubs hold benefit games “for the sufferers from the great fire.”  (Left: As this postcard implies, the White Stockings had to finish out the season in borrowed uniforms.  They used donated railroad passes to play games out East.  Click on image to enlarge.)

The city of Chicago rebuilt itself, of course, and the White Stockings built a new park on 23rd Street (see Ballparks tab, above) and took the field again in 1874.  The White Stockings never posed much of a threat to the mighty Boston Red Stockings, and by the end of the season the Chicagos languished in fifth place, 18-1/2 games out of first place. On November 1 the Chicago Daily Tribune published the teams’ standings and optimistically summed up the White Stockings’ performance: “The Chicagos made but a poor showing in the race, but hope to do better next time.” 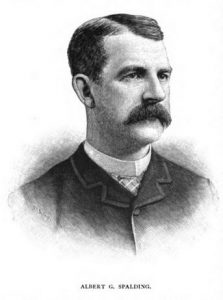 Alas, by the middle of “next time’s” 1875 season, the White Stockings were again floundering in the middle of the standings of the National Association of Professional Base Ball Players.  Conversely, the Boston Red Stockings were well on their way to their fourth consecutive pennant, thanks to the pitching of Al Spalding. White Stockings President William Hulbert, however, was thinking ahead to his own “next time,” and that summer he signed Boston’s ace pitcher and received commitments from a few of Spalding’s teammates, including future Hall of Famer James “Deacon” White.  (Right: An engraving of Albert Spalding from a nineteenth century history of sports in America and other countries.) 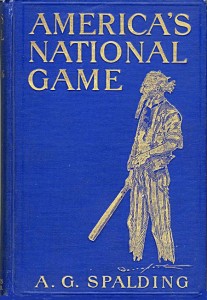 With Spalding, President Hulbert had indeed found a kindred spirit.  Baseball’s National Association at this time was plagued by gamblers, game fixing, and rowdiness (with carousing and alcohol consumption among both players and spectators alike).  In early 1876, a popular sporting magazine succinctly analyzed the situation:  “The existing National Association of Professional [Base Ball] Players is an organization which can be run in the interests of either the honest or the knavish class of the professional players of the country.”(Right: The first edition of Al Spalding’s baseball history and memoir (1911).  Holding a baseball bat on the cover is  America’s icon, “Uncle Sam.”) 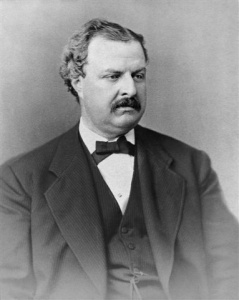 Hulbert, Spalding, and a few like-minded baseball men chose the former.  On February 2, 1876, representatives of eight major professional teams met in New York City to reorganize baseball, and the National League was thereby founded.  The Chicago Daily Tribune two days later called it “the most important measure ever adopted by the professional baseball clubs of this country.” With the new league in place, the National Association faded away.

William Hulbert had now succeeded in improving the sport of baseball.  Next on his agenda was improving his White Stockings.

Above: Chicago businessman William Hulbert (1832-1882) bought stock in the fledgling White Stockings in 1870. Five years later he assumed the presidency of the team and the Chicago Base Ball Association.