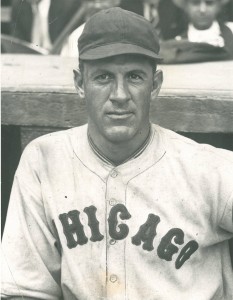 Decades before Ernie Banks captivated Chicago baseball fans as “Mr. Cub,” there was Charlie “Jolly Cholly” Grimm–longtime player, manager, consultant, and even team broadcaster.  He started out with the Pittsburgh Pirates, but the staid Pirates manager did not appreciate the not-so-grim Charlie’s singing and left-handed banjo playing, so he was traded to the Cubs in late 1924.  At spring training in 1925, as he was playing in a string quartet with other musically inclined players, owner William Wrigley walked over, saw one ballplayer’s beat-up guitar, and told them, “You boys need new instruments.”  Charlie knew right away that he had found the right team.

And the team had found the right first baseman, too.  That season he led the Cubs in both batting average (.306) and runs batted in (76), though for the first time in their long history, the Cubs finished last in the National League.

Things got better when manager Joe McCarthy came on board, and the Cubs finished first in 1929.  Wrigley never forgave McCarthy for the team’s failure to win the World Series, however, and McCarthy found himself replaced by Rogers Hornsby.  The players disliked the acid-tongued and hard-driving Hornsby, and with no pennant hopes in sight in 1932, he was fired and player Grimm was elevated to the manager’s seat.

The Cubs worked well with easygoing “Jolly Cholly,” and they captured the National League pennant that year and also three years later (but failed to come through in either the 1932 or 1935 World Series).  After a second-place finish in 1937, Grimm felt he was losing his ability to handle and relate to players, and he resigned during the 1938 season.  Catcher Gabby Hartnett took over, and the team won the pennant in down-to-the-wire, dramatic fashion (but again did not win the World Series).

Grimm stayed on in baseball, broadcasting games and managing Bill Veeck’s then minor-league Milwaukee Brewers.  In the mid-1940s he came back to Chicago and in 1945 he once more took the Cubs to the World Series (and once again lost).  In 1949 he moved to the Cubs’ front office, holding a variety of coaching, managing, and consulting positions with the organization. 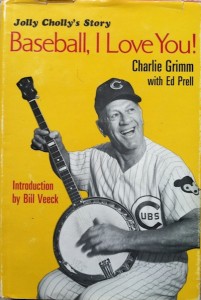 Cubs owner Philip K. Wrigley publicly referred to Grimm as “my favorite baseball character.”  The word “character” is indeed correct.  Grimm always said that his baseball philosophy was “make it fun.”  He told a Sports Illustrated writer in 1955 that “I’ve always had a lot of fun.  When I was a kid we used to have those old-fashioned Saturday nights at our house with music you could hear for miles. Dad played the bull fiddle, Mom had a harmonica, my brother Bill played the guitar and Ollie would blow the bass tuba and my sister Margaret would be at the piano.  We all played by ear.”  (Left: the dust jacket of Grimm’s 1968 memoir, which was reissued in 1983 under the title Jolly Cholly’s Story: Grimm’s Baseball Tales.)

Grimm’s hijinks carried over to the baseball field, too, where he often entertained the crowds (and the players) with impromptu dances, pratfalls, and pantomimes.  As renowned sportswriter and publisher J. G. Taylor Spink wrote in The Sporting News in 1945, “Charlie [is] a skilled mimic.  Without any studied effort, he can imitate the walk, talk and actions of almost anyone in the National League.  His impersonations of umpires keep the fans in stitches and give the players and fellow umpires many a chuckle (when he is not mimicking them).

“Occasionally, however, his mimicry gets him into trouble.  Last year in Cincinnati the Cubs were giving the Reds a terrific drubbing.  The fans were riding the Reds in unmerciful fashion.  Honus Lobert, then coach of the Reds, stopped Grimm on the way to the coaching box and asked him to give the crowd a laugh to take their minds off the Cincinnati players.  Grimm readily agreed.  The first person he noticed was George Barr, the umpire, who has a strut all his own.

“Barr called a decision at third base and as he strutted down the left field foul line, Grimm followed, strutting after him.  The crowd was in an uproar.  Barr kept walking, with Grimm right behind him.  Suddenly Barr sensed something was up, and turned.  Grimm failed to turn quickly enough–and Charlie’s next walk was to the clubhouse.”

For some fifty years, Charlie Grimm was a major part of the Chicago Cubs.  When he died, he became part of Wrigley Field, too, as his last wish was to have his ashes scattered about the ballpark.

(Of course, as I say in the Early Years section of my Cubs page, a case could be made for Jimmy Wood being the true “original Mr. Cub,” though at that time the team was just being formed and it had no name until “White Stockings” was adopted.)