“Any team can have a bad century,” is how Cubs broadcaster Jack Brickhouse occasionally shrugged off the team’s misfortunes.  But over 100 years ago, fans reveled in the accomplishments of the Chicago North Siders.  After all, shortstop Joe Tinker, second baseman Johnny Evers, and first baseman Frank Chance made up one of the most famous double-play combinations in the history of baseball.  Their steady fielding and timely hitting helped the Cubs capture four National League pennants (1906-1908, 1910) and two World Series titles (1907–1908). 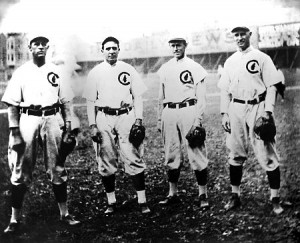 But let’s not forget the other ballplayers.  The fourth member of the Cubs famous infield was Harry Steinfeldt (a popular trivia question is “Who was the third baseman with Tinker, Evers and Chance”)?  And Mordecai “Three Finger” Brown, who lost an index finger in a farming accident, was not only a renowned Cubs player, but he was also one of the most famous pitchers of all time.  (From left to right in this 1907 photo are Steinfeldt, Tinker, Evers, and Chance.  Click on it to enlarge.) 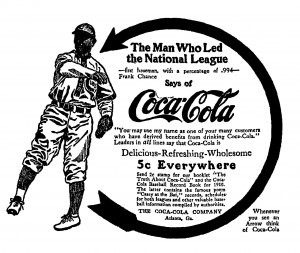 Frank Chance–who was often called “The Peerless Leader” or “Husk” because of his husky physique (6’0″, 190 lbs.)–became manager of the Cubs in 1905.  A tough competitor and amateur boxer, he often motivated his players by telling them that “you do things my way or meet me after the game.” He and his fellow ballplayers would be the first to acknowledge that tenacity and old-fashioned grit had much to do with the team’s good fortune.

And grit they certainly had.  In 1934 Joe Tinker, long retired from baseball and living in Orlando, Florida, got to reminiscing with a St. Petersburg sports editor about his playing days and how the game–and the players–had softened up over the years. 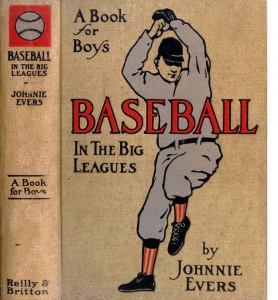 Tinker enjoyed talking about his long career.  One of the many stories jotted down by the sportswriter that day centered on fellow infielder Frank Chance:  “It was one day after an especially hard-fought game which the Cubs lost after going into extra innings,” said Tinker.  “Frank was fit to be tied.  Mrs. Chance met him and tried to soothe him.  She said:  ‘Don’t take it so hard, Frank; you know, you still have me, even though you lost the game.’  To which Chance replied:  ‘Yes, honey, I know, but there were a couple of times this afternoon when I would have traded you for a base hit.'”

Above right:  In 1910, second baseman John “Johnny” Evers (along with ghostwriter Hugh Fullerton, the well-known Chicago sportswriter who uncovered the infamous Black Sox scandal) published Touching Second, their story of how baseball was played during that era.  It was later reissued as Baseball in the Big Leagues (with Evers’s first name misspelled).

Like Tinker and Chance, Evers, too, believed that baseball players had lost some of their toughness over the years.  In February 1918, sportswriter William Veeck (father of the legendary Bill Veeck) interviewed Evers for the Chicago Evening American.  Veeck observed that if the former Cub had his way, he “would restore some of the roughneck features of baseball. . . . He would place a premium upon the two-fisted, sharply spiked base-runner who went into the bag like a ton of brick and chase the safety-first guardian to center field.” 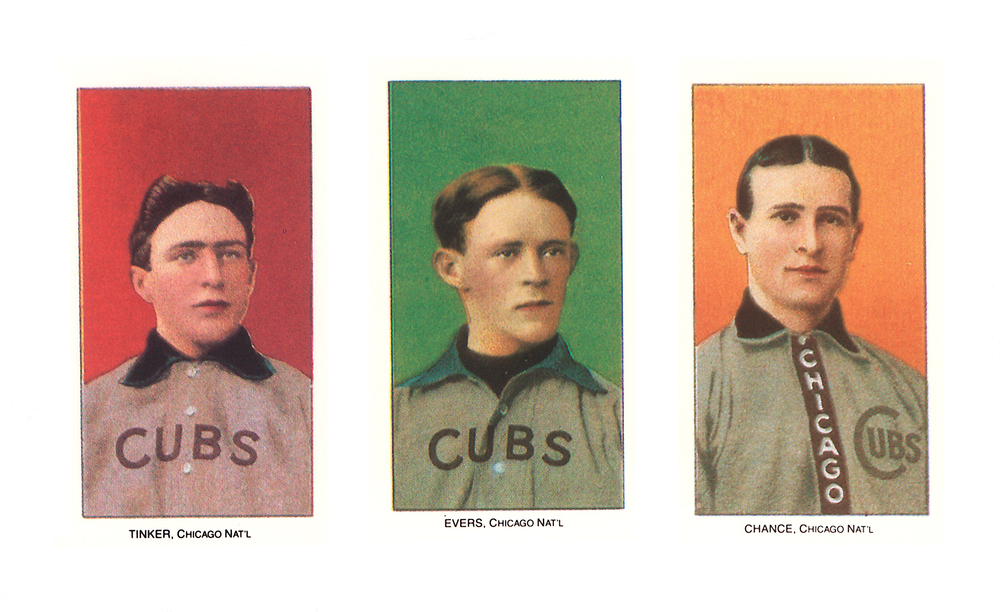 The team’s archrivals in the early 1900s were John McGraw’s New York Giants, led by legendary pitcher Christy Mathewson.  When a Chicago Daily News reporter asked Joe Tinker to recall his “greatest day” in baseball, the shortstop immediately replied that “you know it was against the Giants.  I think that goes for every Cub who played for ‘Husk’ Chance in those years on Chicago’s West Side.”  Warming to his subject, he added, “If you didn’t honestly and furiously hate the Giants, you weren’t a real Cub.” 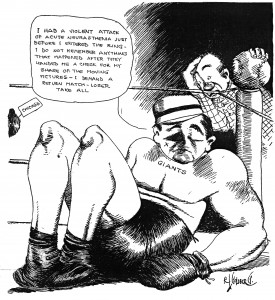 You weren’t much of a Cubs fan, either.  For that matter, the Giants, their supporters, and the New York press similarly relished the team’s confrontations with its Chicago nemesis, and the newspapers  devoted much space to write-ups of the games.  And it wasn’t just articles that were published.  For example, this cartoon appeared in the July 12, 1910, issue of the New York Evening Mail, the day after the Cubs knocked out the Giants by the score of 4-2.  (Note the boxing glove labeled “Chicago” at far left. Click on cartoon, baseball cards, and Coca-Cola ad to enlarge.)

Although this cartoon has long been lost to history, the Evening Mail of July 12 featured something else that proved to be not nearly as transitory.  Perhaps recalling a double play executed by the Cubs infield the day before, Chicago-born journalist Franklin P. Adams–and staunch Cubs fan–sat down and hastily scrawled a poem for his column, a verse that is best known today by its reprinted title, “Baseball’s Sad Lexicon.”  Also called “Tinker to Evers to Chance,” it is the second-best-known baseball poem in America–close behind Ernest Thayer’s immortal “Casey at the Bat,” written in 1888. 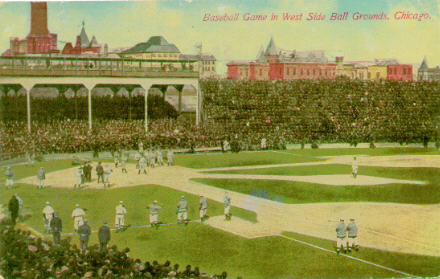 July 12, 2010, marked the 100th anniversary of Adams’s famous bit of doggerel. That year Tim Wiles, Director of Research at the National Baseball Hall of Fame, and I discovered some new facts about the poem (including not only its original publication date but also its original title, “That Double Play Again”).  We were thrilled, naturally, when the Chicago Tribune, Major League Baseball, and the Cubs blog Bleed Cubbie Blue covered our work on July 12.  Various sports blogs did, too, and the author of an article on Johnny Evers in the December 3, 2012, issue of Sports Illustrated mentioned our names.  I later expanded my research in an article for NINE: A Journal of Baseball History and Culture (“Franklin P.  Adams’s ‘Trio of Bear Cubs’,” Spring 2011, pp. 114-40).

Here is the original version of Franklin P. Adams’s tribute to the Chicago Cubs’ infield, just as it appeared in the New York Evening Mail on July 12, 1910: