The Homer in the Gloamin’

Darkness had almost enveloped Wrigley Field when Chicago Cubs manager / catcher Gabby Hartnett strode to the plate on September 28, 1938.  It was the bottom of the ninth inning, and the Cubs were locked in a 5-5 tie with the Pittsburgh Pirates.  To add to the tension, the Cubs had won 8 games in a row and now trailed the first-place Pirates by merely a half-game in the pennant race.  Furthermore, with the swiftly fading daylight and no lights at Wrigley Field, the umpires were all set to call the game a tie after Hartnett finished batting.  Both teams would then have to replay it the next day as part of a doubleheader. 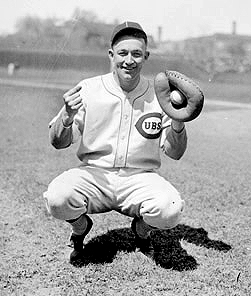 When Charles Leo Hartnett left home in 1922 to join the Chicago Cubs, his mother advised him to “keep your mouth shut, your eyes open, and behave yourself.”  Dean Sullivan, a reporter for the Chicago Herald Examiner, soon interviewed Hartnett, and after the young man replied with only a few words to his questions, the sportswriter remarked, “You’re certainly a gabby guy.”  Sullivan began calling the Cubs catcher “Gabby” in his articles, and the nickname stuck.  Actually, Hartnett could be quite talkative when he felt comfortable with the people around him.  This photograph was taken in 1926.

Pirates pitcher Mace Brown had two strikes on Hartnett–both curve balls–and at 5:37 p.m. he threw another curve, which Hartnett drove into the left-field bleachers.  “The crowd was in an uproar, absolutely gone wild,” recalled Pirate outfielder Paul Waner some twenty-five years later for Lawrence Ritter’s now classic oral history, The Glory of Their Times.  “They ran onto the field like a bunch of maniacs, and his teammates and the crowd were mobbing Hartnett, and piling on top of him, and throwing him up in the air, and everything you could think of.  I’ve never seen anything like it before or since.”

Neither had anyone else.  “We surrender to inadequacy,” is how sportswriter John Carmichael began his September 29 article for the Chicago Daily News.  “This Cubs-Pirate pennant fight has gone far beyond our poor power to picture in words.” 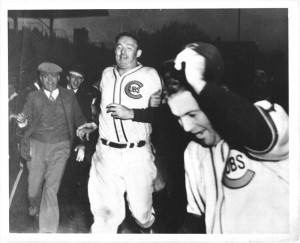 Hall of Famer Leo “Gabby” Hartnett remains one of baseball’s most renowned catchers.  He caught 100 or more games per season for 12 years and received the National League’s Most Valuable Player Award in 1935 (and was runner-up in 1937).  Here joyful supporters crowd him (center) as he crosses home plate at Wrigley Field after hitting his famous “homer in the gloamin’” on September 28, 1938.  (Click on image to enlarge.)

This Cubs game has often been cited as one of the most famous in baseball history.  Certainly no home run in Cubs history has matched Hartnett’s “homer in the gloamin’,” (a phrase purportedly coined by Associated Press sportswriter Earl Hilligan).  In a 2003 ESPN.com ranking of the 100 greatest home runs of all time, it ranks 47th, the highest ranked Cub long ball.  Hartnett himself called that day “my biggest day in baseball,” and he donated the home run ball, his bat, and his catching gear to the Chicago Historical Society (now Chicago History Museum), where it is a major part of the museum’s exhibit on Chicago sports. 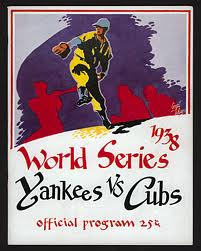 As for pitcher Mace Brown and his teammates, that home run “broke the Pirates’ backs,” as sports columnist Carmichael put it.  The Cubs went on to win the next two games and the National League pennant.  They squared off in the World Series against their old foes from 1932, the New York Yankees.

The Yankees, though, seemed to have had stronger backs than the Pirates.  With ex-Cubs manager Joe McCarthy at the helm, they thoroughly dominated the Chicago North Siders, sweeping the Series 4 games to 0.

The caption of this wire photo, dated October 3, 1938, reads:  “Manager Gabby Hartnett, under whose leadership the Chicago Clubs climbed in one month from third place to the National League pennant, riding down Michigan Avenue, Chicago, in the parade the city gave in honor of the team.”

The Cubs got back in town after 11:00 p.m. on October 2, and according to the Chicago Daily Tribune, “For many minutes after the National League champions alighted from their special train, police and firemen were given a merry time keeping the roaring crowd in control.”  (Click on photo to enlarge.)

1 Response to The Homer in the Gloamin’