It’s one of baseball’s most iconic images as well as one of Norman Rockwell’s best-known Saturday Evening Post covers.  The Dugout shows a dejected Chicago Cubs batboy standing morosely in front of a jeering crowd and a forlorn group of ballplayers in the visitors’ dugout.

Actually, the youth, Frank McNulty, was a Boston Braves batboy.  The famed artist and Post art editor Kenneth Stuart traveled to Braves Field to take photographs during a May 23, 1948, Boston-Chicago Sunday doubleheader (the Cubs lost both games).  McNulty donned a Cubs uniform just for that occasion, and in an interview decades later he reflected on that special day:

I only met Rockwell that one time, and remember him as a rather small, quiet man.  The photographer was doing most of the work, and each of us was photographed individually, including the fans in the background.  I remember they had to work very hard to get me to look sad.  I could not have been happier knowing that I was going to be on a Saturday Evening Post cover.  Rockwell kept changing the tilt of my cap and doing facial expressions to demonstrate how he wanted me to look.

He finally asked me if I had a dog.  When I told him I did, he said, “Try to think how you would feel if your dog died–that’s the look I want!”  They must have taken over twenty-five pictures of me, and I still didn’t get it exactly right.

McNulty added that he was paid five dollars for the modeling job, which lasted two to three hours.  After “his” issue of the magazine was published, he was presented with a Rockwell-signed copy of it during a pre-game ceremony at Braves Field.

The Dugout (occasionally called Bottom of the Ninth) appeared on the cover of the September 4, 1948, Saturday Evening Post (click on image to enlarge).  That’s Rockwell himself in the upper left corner. The Cubs players are, from left to right: pitcher Bob Rush, manager Charlie Grimm, catcher Al Walker, and All-Star pitcher Johnny Schmitz.

Not all of the fans shown were actually at Braves Field, for Rockwell routinely used pictures taken in his studio. Ardis Edgerton, the daughter of Rockwell’s next-door neighbors and a frequent Rockwell model, razzes the Cubs through her hands.

Cub fan and Chicago native Scott Simon, host of National Public Radio’s Weekend Edition, has a print of The Dugout hanging in his office and believes that the “national image of the Cubs as cuddlesome incompetents” probably began with the publication of this issue of the Saturday Evening Post.  In his delightful memoir, Home and Away (2000), Simon writes that he became friends with Charlie Grimm after the ballplayer married a friend of his mother’s.  And because Simon called the woman “Auntie Marian,” he called her husband “Uncle Charlie.”  Writes Simon:

“Rockwell was a great artist, of course,” [Uncle Charlie] told us at a holiday dinner in the early 1960s.

“He didn’t paint you very well,” Auntie Marian interjected.  “I’ve never seen you hold your hand against your face like that.  That’s Jack Benny.  Rockwell made you look like a basset hound.”

“A great artist,” Uncle Charlie continued.  “You can recognize everybody.  I see some of the stuff they call art today in apartment building lobbies.  I want to ask, ‘Who spilled the ketchup around here?’ But Rockwell painted so beautifully.  You can count the loops in the towels behind us. . . . What an artist.  But he wasn’t accurate.  Bad as we were, and we lost ninety games that year, the fans didn’t really boo us.”  Charlie laughed behind his huge, ham-slice hands.  “Maybe they should have.  Maybe they should have.” [Note: The Cubs won only 64 games in 1948 and finished last in the National League.] 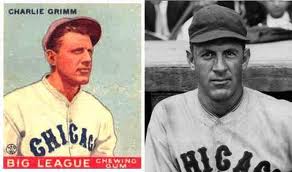 Grimm himself owned a charcoal draft of The Dugout, on which Rockwell had inscribed: “To Charles Grimm, a long suffering but wonderful manager, Norman Rockwell.”  The finished watercolor is in the collection of the Brooklyn Museum.  There are also two oil on canvas versions, one of which sold at auction in March 2001 for $345,000.